In 2012. I spent a week in Liberia with Save the Children. At the time I wrote two stories from my experience. Since then, the country was hit by Ebola and sadly, the situation is not much better today. 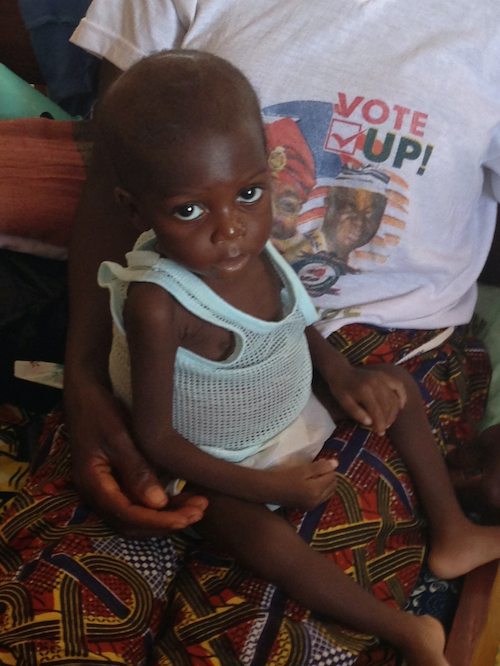 The malnutrition ward at Kakutta hospital filled me the mixed emotions of sadness and hope. The ward is the size of a small classroom and is filled with beds end to end with little room to walk in between. The children, all under five are too poorly to pay any attention, whilst their mothers all stare at us, surprised that foreigners have come to their country. In the UK there might be a few toys, or happy paintings of animals on the wall, here the walls are badly stained and there are some old mosquito which have seen better days.

Sackie is nine months. He has been unwell for the last three weeks with malaria. His immune system has been weakened because his poor diet. He mainly eats rice water (a mixture of rice and water) after being weaned too early. His mother has little understanding how to best feed a baby because she has limited access to food with any nutritional value. The good news that after receiving intravenous fluids and medication his condition is improving and no longer immediately life threatening. Whilst in hospital his mum is being given support with breastfeeding and advice on diet.

Fortunately Sackie lives only a two hour walk from the hospital which is close for Liberia. The hospital is well stocked with medicines and the staff are dedicated despite tough conditions and little pay. What looks like rudimentary healthcare in conditions considered negligent in the UK is actually lifesaving for children like Sackie. Without this basic treatment he would have certainly died. There is a lot more to do, in Liberia 42% of under fives have stunted growth. However this basic care is life saving. If the support from international aid or charities dried up the consequences for children like Sackie would be unimaginable.